Gratitude, solidarity with Asians expressed at vigil amid rise in attacks

For Serapia Kim, the sight of so many people of so many ethnicities in the parking lot of Incarnation Church in Glendale Wednesday night spoke more loudly than any prayer or speech.

“We need to know that we’re here for each other,” she said looking out at the properly distanced crowd gathered for the March 31 Prayer Vigil for Racial Acceptance, organized to show solidarity with Asians and Pacific Islanders targeted in an alarming rise of acts of hate over the past year.

“It’s important to see each other eye-to-eye, to grieve and show solidarity, empowered by the scripture, and to know we’re not fighting this alone.”

That being said, Kim added that, for the first time in her life, she had purchased pepper spray to protect herself.

“I took martial arts, I thought I’d be able to defend myself, or at least run away,” explained Kim moments before speaking at the vigil. “But seeing these attacks on elderly people who can’t defend themselves, it’s just horrible.”

It’s a fear that concerns Auxiliary Bishop Alejandro Aclan, one of the vigil’s organizers, who said he has heard reports of Asian and Pacific Islanders, particularly women, who are “isolating themselves in their homes, afraid to step out. That’s one of the reasons for this gathering.”

Christopher McKim, a parishioner at Incarnation, said he had come to the vigil because he could tell the effect the attacks were having on his friends of Asian descent, or in his words, “the weight that was on their shoulders.”

“I think this is another opportunity to come together and really support each other,” McKim said. “We should take every opportunity to walk alongside our brothers and sisters.” 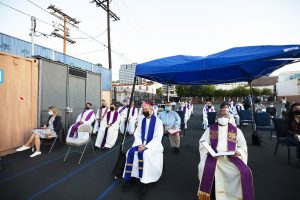 Held on a clear, warm night, the vigil expressed a mix of emotions: sadness and hope, anger and love, concern and compassion. Nicolas Lau, one of the evening’s speakers, seemed to sum up its rather fractured emotions when he said he was “grateful for the support, but sad all this has to happen.”

The reason for concern is obvious. As Bishop Aclan pointed out in his remarks, more than 3,800 acts of hate had occurred against Asians and Pacific Islanders in the U.S. from March 2020 to February 2021, an increase of 149% over the previous year.

One of the most recent attacks, an assault on a 65-year-old woman in New York, hit home in a special way for the church-going crowd. The woman, Vilma Kari, is Filipino and had been beaten, kicked and stomped by an assailant, as she was on her way to attend Holy Week activities at St. Patrick’s Cathedral.

“She was going to church!” Bishop Aclan said.

Filipinos make up one of the largest, and fastest growing groups of Catholics in the US. In fact, as Archbishop José H. Gomez pointed out in his opening remarks, anyone who believes Filipinos are a relatively new immigrant group simply doesn’t know their history, pointing out that Filipino sailors landed in Morro Bay in 1587, meaning “Filipinos predate the Pilgrims by 33 years.”

Still, history is of little comfort to some who have told Bishop Aclan that “my mother doesn’t want to go out until all this is over.”

If there is to be an end to it, the night’s speakers made clear it would require the concerted efforts and actions of good people. Setting the tone for the night, Incarnation pastor Father Rodel Balagtas opened the vigil with a simple reminder: “We are indeed our brother’s keeper.”

To that point, Sister Teresa Liu recounted witnessing a 10-year-old girl be the victim of a hate crime and recalled how she and a group of people came together to help the girl, all of them, “united in mercy.”

Lieu said racism is evil because “it fails to recognize that we are all children of God,” and said the only way to defeat it is to be “bold in the way we love.” 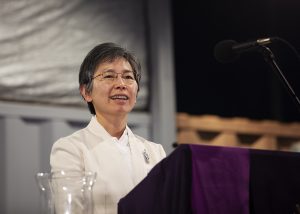 Given that the increase in attacks had occurred over the last year, there is a strong suspicion that they are tied to rhetoric concerning the COVID-19 pandemic. But in her talk, Serapia Kim pointed out that anti-Asian feelings have a long, ugly history in the U.S., ranging from the Chinese Exclusion act in 1882, to her being screamed at with abusive, obscene language too while shopping at a grocery store.

“That had never happened to me before,” she said. “It’s an alarming trend, and it’s amplified by the state of the pandemic, but it has always existed.”

Nicolas Lau echoed Kim’s sentiments through personal examples that range from stereotypes, i.e. “You must be good at math,” and that even if Asians “suffer in silence, that does not imply that we’re OK with it.”

Still, Lau ended his talk on an optimistic note, saying “Yes, we shall learn to love each other.”

Asked after the vigil had ended how he found the strength to be so hopeful, he answered: “I mean, without hope, what do you have? If there’s no hope, what’s the point?

“I purposely ended my talk by sharing that because that is the trajectory we need to go on. Now,  I didn’t say it was going to be easy. But this is the way we need to move forward. We need to love each other. And, yes, some people are going to take longer to love than others. But, there’s no point in having such an event as this, without giving hope. Especially from the Church.”