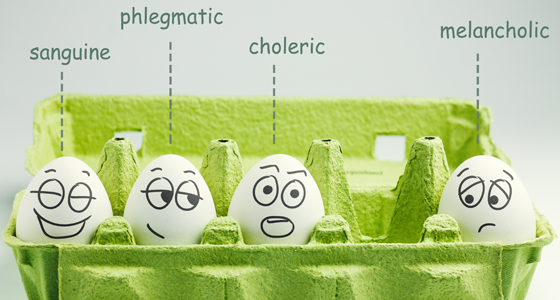 The identification of four temperaments—choleric, melancholic, sanguine, and phlegmatic—goes back to ancient sources such as Hippocrates and Galen and was taken up again and developed in the Middle Ages. The enduring character of this doctrine reveals that it has struck on something perennially rooted in human nature. Most people have a predominant temperament (even if they have a secondary temperament and indeed some elements of all four) that has a predominant emotion associated with it as well as a predominant way of responding emotionally to the actions of others and other external events.

In the following descriptions, I will focus upon the strengths and weaknesses of each temperament, but especially upon the weaknesses, since that is where parents have to be especially careful in their upbringing.

The person with a choleric temperament is most easily disposed toward anger. When faced with obstacles to their desires, the instinctive emotional response of cholerics is to fight and overcome those obstacles. They can be very hopeful or daring in the face of these obstacles. Because they are often very driven to achieve goals, choleric persons tend to make good leaders, but they also tend to be thoughtless about the effects of their actions upon others.

Cholerics tend to get energy from being around groups of people, and their overall emotional tendency is toward excess. They can easily fly off the handle, but they can also calm down relatively quickly. As children, cholerics tend to get in a lot of trouble because of fighting or not thinking about the needs of others. On the other hand, they are not easily persuaded to follow the crowd, since they don’t give in as easily to peer pressure.

The person with the melancholic temperament is most easily disposed toward sadness. When faced with significant obstacles to his desires, the instinctive emotional response of the melancholic is to withdraw. Because they feel their emotions very deeply, melancholics tend to be compassionate and thoughtful. They make very faithful friends. But they also get easily discouraged.

Melancholics often feel drained in social settings. Because they hold things inside and are not inclined to share their feelings, they sometimes will ruminate over a past injury and eventually explode in resentment or anger. As children, melancholics tend to be thoughtful of others, obedient, and the source of little trouble, but they also tend to perceive injustices in the way they are treated relative to other children—even if the parent has been treating everyone the same. When this happens, the melancholic child can become peevish and sulk for a long time.

The person with the sanguine temperament is most easily disposed toward joy and desire. When faced with obstacles to their desires, the sanguine’s instinctive emotional response is to redirect his desires to something else easy and pleasant, or at least to find some covert way around the obstacle to get what he wants. Although sanguines are most easily disposed toward joy, their emotions can fluctuate quite quickly, and they can go from being very joyful to very sad in a short time, and vice-versa.

Sanguines make friends easily, and tend to be fun, expressive. and the life of the party. Like cholerics, they derive energy from social settings. But their friendships often lack depth, and they easily move on from one group of friends to another. Also in similar fashion to cholerics, sanguines tend toward emotional excess. As children, sanguines often get into trouble for seeking pleasure, and they often get distracted from schoolwork. They tend to get over corrections quickly, even harsh ones: so much so that they sometimes seem to forget that they were ever corrected.

The person with the phlegmatic temperament is most easily disposed toward fear, but not just any fear: fear of hard work or effort. When faced with obstacles to their desires, the instinctive emotional response of phlegmatics is to give up and stop caring. For this reason, they sometimes seem to be lacking any strong emotions. They prefer to be in the background in social settings, and let others take the lead. They tend to be easygoing, and good listeners. As such they often make good companions for people with choleric temperaments.

Phlegmatics’ primary weakness is a lack of drive: they too easily settle for lesser goods and accomplishments. They tend toward being less emotionally invested than they should be. But once they make up their mind to do something, they can be very methodical and persevering. As children, phlegmatics tend to be well-behaved, but they also need constant prodding to accomplish their duties. When they are corrected, they tend to respond dispassionately, taking the correction like water off a duck’s back. Often, they put up little resistance to peer pressure, since they tend to take the path of least resistance.

Although knowing the temperament of a person can be helpful in interacting with both adults and children, the advice in this section and the next is primarily geared toward helping parents understand and form their children before they reach their adult years.

With the choleric and sanguine child, the general strategy should be to rein in excessive tendencies. Cholerics and sanguines require frequent and firm correction to moderate their emotional inclinations. At the same time, they should be given opportunities to direct their inclinations toward legitimate and healthy goals. The choleric child should especially be trained to think about the needs of others. The sanguine child should be trained to overcome distractions and to do the good things that are sometimes unpleasant for them. Sanguine children are especially vulnerable to unhealthy romantic relationships when they enter their teenage years. So, much vigilance should be exercised in that regard.

With melancholic and phlegmatic children, the general strategy should be to encourage them to strive for more than they think they can accomplish. When correcting a melancholic child, the parent should be prepared to take some time sitting down with the child, asking why he did certain things and encouraging him to make his feelings known. Melancholics often have a hard time believing that others understand the depth of their sadness or difficulties, and so they need to be assured by their parents that they are understood. Phlegmatic children should also be frequently encouraged and trained to apply themselves consistently and methodically to long-term goals and projects.

Let’s go back to Plato’s advice for child-rearing: making the good pleasant and the bad painful. In general, positive reinforcement focusing on rewards for good behavior should be the first approach used by parents. But for the choleric and the sanguine, you should be a bit more willing to make use of punishments that make the bad painful, whereas for the melancholic and the phlegmatic the emphasis should lean more toward rewards that make the good pleasant.

Did you enjoy this excerpt? Would you like to know more? Order your copy of Always A Catholic today!