Lord, Give Us Ears to Hear and Eyes to See 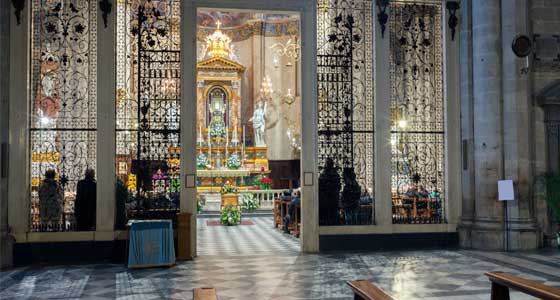 Several years ago, there was a death, and a family wished to meet and talk with the priest who would be celebrating the funeral Mass. I was helping at the parish, and the pastor asked if I could take the funeral and assist with the pastoral needs of the grieving family. I was happy to assist and looked forward to seeing how I could help.

When the time came, the family and I sat down and began to discuss their loved one’s life and accomplishments. I took a few notes. Then we moved into the selection of Scripture readings. There were some clarifying questions, but everything seemed well. Then we began to address the music.

The family asked if they could have a beloved secular song at the funeral. I explained that only approved liturgical music could be sung but that such a display of affection could be done among the family the night before. They weren’t happy with the answer, and they pushed back, saying, “Father, this would mean a great deal to our family.” I acknowledged the sentiment but indicated that such secular music would be inappropriate for such a sacred event.

They weren’t pleased, but we moved on. They asked if we could have a eulogy. I indicated that eulogies are discouraged, but one could be offered so long as it focused on the paschal mystery, which I had to explain to them. They were confused and told me they wanted to list all the things their loved one had achieved in his life. I again mentioned that such an account of personal achievements and self-help could be described and listed among the family. It has its place, but not in the funeral Mass.

At this point, the family became frustrated and asked if another priest was available. When I indicated that the pastor was planning to be away and that my guidance was according to his parish policies (not to mention the liturgical law of the Church), they threatened to go to another parish. I indicated that they could pursue such options and that I would be happy to make a few phone calls on their behalf. My sincere efforts to help them in this moment of commodity were not appreciated.

Finally, they calmed down. I remained calm throughout the meeting and attempted to approach them with the gentleness and compassion that should be given to any grieving family.

But they had one more request. Their loved one had served on the board of a local outreach organization, and the organization wanted to present him with a posthumous award. The family thought it would be wonderful to do it at the funeral. Again, and not trying to be the bad guy, I explained that such social activism is noble, but such awards would not be appropriate in the funeral Mass. I suggested that perhaps the award could be given at the graveside service or at the reception afterward.

At this counsel, the family blew up. They were irate and beside themselves. Knowing that the apparent issues are never the issues and that people grieve in different ways, including via anger, I waited, and when they were relatively calm, I asked if I could talk with them about what the funeral Mass truly is and what we get to participate in during its celebration.

They were not overly thrilled with my request, but they were somewhat compliant. And so, using a softened voice, I dove right in.

“The funeral Mass is when we offer fitting adoration to God. We pray and lift up supplication for the eternal repose of your loved one’s soul. This is done during a Mass so that the re-presentation of the sacrifice of the Lord Jesus, to the Father, by the power of the Holy Spirit, will be offered for his eternal rest. We don’t ‘personalize’ the Mass since it belongs to the Lord Jesus and his full mystical body throughout the ages. We don’t have to ‘make it special’ with sentiment, self-help, or social activism.

“The Funeral Mass is already eternally special and of immense spiritual power. You don’t have to rely on commodity to find the best deal among different priests or parishes, since the best gift that your loved one will be given is by the Lord Jesus himself, as he offers this sacrifice for your loved one and seeks to be the Good Shepherd by purging him of any venial sins and temporal punishment so that he can be presented to the Father in all his glory and majesty.”

After I was done, the family were speechless. They asked me, “And all that is real?”

Suppressing a smile, I nodded and declared to them: “Yes, this is the reality. This is all real.”

The conversation continued, but with a much deeper spiritual focus. In many respects, by seeing a renewed glimpse of the glory that awaits those who love God, this family realized what Job described when he exclaimed:

There is also what St. Paul experienced when Ananias laid hands upon him, as recounted in the Acts of the Apostles:

So Anani’as went and entered the house. And laying his hands on him he said, “Brother Saul, the Lord Jesus who appeared to you on the road by which you came, has sent me that you may regain your sight and be filled with the Holy Spirit.” And immediately something like scales fell from his eyes and he regained his sight (9:17-18).

The conversion that happened in this family is the greater conversion that we need among all believers today. We need a deeper spiritual awareness that God, his providential plan, his economy of salvation, and his call for us to worship him are all true and real and merit the response of our entire life.

The conversation above could have happened in any parish in the universal Church. It could occur with almost every family, or portions of families, throughout the world.

Did you enjoy this excerpt? Order your copy of Real Religion today!

US BISHOPS PROMISE SYNOD OF WOKENESS

Nothing stirs the religious passions like talk of “accompaniment” and “inclusivity,” am I right? That’s what you might think if