Tradition tells us that St. Augustine once said, “He who sings prays twice.” Whether the holy bishop actually coined the phrase remains uncertain, but the words speak to the bond between music and prayer that has spanned centuries of Church history. That tradition is what motivates the Gloriae Dei Cantores choir.

“Since its founding, Gloriæ Dei Cantores (Latin for “Singers to the Glory of God”) has been dedicated to the pursuit of truth, beauty, and authenticity, in the music we undertake — from Gregorian Chant to the 21st century,” said Kirsti Pfeiffer, one of the choir’s members, who also serves as its the director of marketing and communications.

In a conversation with Angelus, Pfeiffer expressed the group’s commitment to passing on Christianity’s rich musical tradition. “We strive to capture the vision of each composer and to preserve sacred choral works for future generations.” 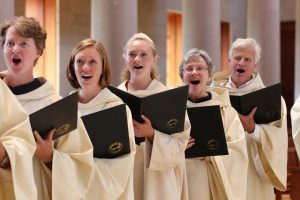 Founded in 1988, the musical group is affiliated with the Community of Jesus, an organization based in Orleans, Massachusetts, that defines itself as “an ecumenical Christian community in the Benedictine monastic tradition.”

Gloriae Dei Cantores has performed music by a variety of composers, spanning a range of time periods and styles. But their latest album, “Stabat Mater: Choral Works by Arvo Pӓrt,” focuses entirely on one composer. According to the Gloriae Dei Cantores website, the Estonian composer Pӓrt is currently the most-performed composer of classical-style music in the world.

At the same time, Pfeiffer said that it was not just his popularity that encouraged the choir to make an album of his music. “Since Gloriæ Dei Cantores’ founding, we have always been striving to not only share our music, but learn and ingest the music, history, and culture of the nations we visit and of the music we sing,” she said. “With that in mind, Mr. Pӓrt’s life journey has married the eastern and western faiths.”

Pfeiffer also expressed admiration for the innovations Pӓrt has contributed to choral music. “His new musical voice of tintinnabuli draws on the western musical origins of Gregorian chant — something we as a community sing four times a day in our offices of the Liturgy of the Hours.” Tintinnabuli is a minimalist style of musical composition that Pӓrt developed from his experience with chant music. Through this method and throughout his repertoire, Pӓrt has developed a reputation for using the text of a piece to determine musical arrangement and vocal interplay.

“Through Arvo Pӓrt’s new expression,” added Pfeiffer, “we have gained much life and education through studying his works.” 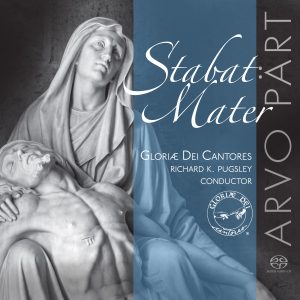 The album “Stabat Mater” opens with the lively “Peace Upon You, Jerusalem,” whose text from Psalm 122 expresses joy upon reaching God’s holy city. Other pieces include “Salve Regina” and “Magnificat,” both Marian prayers, and “Nunc dimittis” (the canticle of Simeon from the Gospel of Luke), a slow, meditative piece that employs the tintinnabuli technique.

The concluding and titular piece, “Stabat Mater,” is a musical representation of the Virgin Mary’s experience at the foot of the cross. Many composers have contributed their own arrangements of this choral contemplation on the Stations of the Cross, and it is a popular performance piece, especially during Lent.

Pfeiffer hopes that all who listen to the album, regardless of their level of familiarity with Pӓrt’s work or classical choral music, can experience a sense of contemplation through the music.

“Arvo Pӓrt’s music does indeed cross all boundaries to affect all who listen to it. Whether you’re searching for refreshment, finding yourself in an impossible situation, or aching in a deep place beyond what words can express, the music of Pӓrt can bring you peace in these troubled times.”

The album “Stabat Mater: Choral Works by Arvo Pӓrt” is available to stream and purchase at gdcrecordings.com.