The Office of Papal Charities announced March 26 that it purchased enough doses of the Pfizer-BioNTech vaccine to inoculate 1,200 of “the poorest and most marginalized people who, because of their situation, are the most exposed” to the coronavirus.

Guests of a shelter run by the Missionaries of Charity near Rome’s Colosseum were among the first to receive their shots March 31. By the time the pope visited April 2, the Vatican press office said, about 800 people had received the first of their two doses. 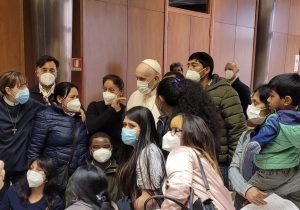 “Just before 10 a.m., Pope Francis went to the atrium of the Paul VI Hall while vaccinations were underway for some people who are homeless or in difficulty and are welcomed and accompanied by various Rome associations,” the press office said.

“The pope greeted the doctors and nurses, watched the procedure for preparing vaccine doses and visited with people waiting for their vaccinations,” the statement said.

Announcing the vaccination program, the Office of Papal Charities, run by Cardinal Konrad Krajewski, encouraged people to buy a vaccine for “our poorest and most vulnerable brothers and sisters” by making a donation online at www.elemosineria.va, the address of the papal almoner’s office, which distributes charity in the name of the pope. 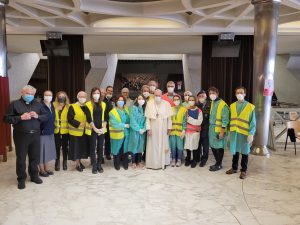 Pope Francis is pictured with medical staff as he visits a COVID-19 vaccination clinic in the Paul VI hall at the Vatican April 2, 2021. At left is Cardinal Konrad Krajewski, the papal almoner. (CNS photo/Holy See Press Office)

Pope Francis has repeatedly encouraged people to get vaccinated to protect their health, the health of their loved ones and the health of their neighbors. He also repeatedly has called for global efforts to ensure equitable distribution of the vaccine, rather than policies that amount to wealthier countries buying up most of the available shots and reserving them for their own citizens.

Jesuit Father Camillo Ripamonti, president of Centro Astalli, a Jesuit Refugee Service center assisting refugees in Rome, said in a statement March 31 that people assisted by the center would be among those vaccinated by the Vatican.

“It is an important sign for the life of the refugees we welcome, among whom are many vulnerable people, victims of torture and intentional violence,” Father Ripamonti said. The Vatican’s outreach is “a sign of closeness” to people “the pandemic has made invisible and, therefore, more fragile and more at risk of getting sick.”

The Centro Astalli called on the Italian government to “multiple the pontiff’s gesture” by including in the national vaccination program “the homeless and migrants who live in spontaneous settlements or in occupied buildings or reception centers.”