The Prosperity Gospel and the Megachurch Phenomenon 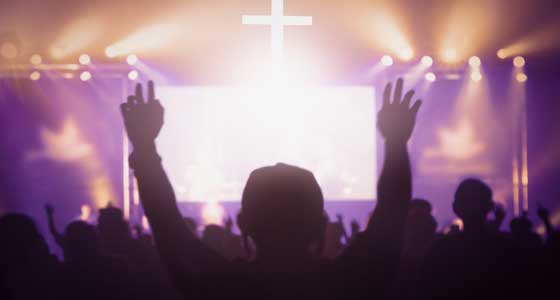 The fullest unhinged example of religion as a commodity is the rather fashionable, modern teaching known as the Prosperity Gospel, as well as the megachurch phenomenon that it seems to create. Although a predominantly Protestant expression, such a view of life has found its way into the hearts and parishes of Catholics.

The Prosperity Gospel exaggerates the temporal blessings of “health and wealth” and gives bloated versions of biblical promises to its adherents. The basic idea is that God wants to bless us in a temporal, even financial, way. We have to be more open to such blessings and claim them as they come. We also have to give support to the celebrity preacher (who is more akin to a motivational speaker) by extensive tithes, gifts, and book and resource purchases.

Even as a preacher of the Prosperity Gospel gains exorbitant wealth, no questions are raised, since his wealth is seen as a divine affirmation of his message and a sign of the wealth that God wants to give to the members of his congregation.

The Prosperity Gospel denies the reality of Christian discipleship. It dismisses the fallenness and suffering of the world and its redemptive value in Jesus Christ. It offends true worship and turns prayer into a casino of bargaining and profiting from God’s favor, real or perceived. The Prosperity Gospel sidesteps the dying to self that is a part of Christian community life (see 2 Cor. 12:8-10). It rejects the many blessings of God that are not in the temporal or financial order. It denies the Lord’s clear call to selflessly serve the poor and forgotten, who are biblically understood as blessings and special signs of the Lord’s presence among us.

In knowing the life of the Lord Jesus, and the cross that he calls his followers to carry, the Prosperity Gospel is certainly religion as a commodity on steroids. It takes the otherwise discreet, veiled intention of a commodity and takes it to the highest possible level (almost of absurdity). Yet it has thousands of adherents, and dozens of supposed ministers have become wealthy, even multi-millionaires, because of it.

In addition, there are some Catholic Christians who have spiritually accepted the message of the Prosperity Gospel. This is expressed in multiple ways, such as interpreting divine promises within exclusively earthly fulfillments, believing that God owes people something for worshipping him, and the denial of the value of the cross and redemptive suffering. These views have sometimes been expressed in Catholic homiletics and liturgical worship. They can be seen when the focus of preaching and of worship ceases to be the adoration and praise of God and instead becomes a series of reminders of what God owes us and how he is expected to deliver in worldly ways.

In whatever tradition it finds itself, the Prosperity Gospel and the entire effort to turn religion into a commodity are a sour domestication of the gospel and its power. This worldview turns the fierce lion of the gospel into a tamed kitten. The gospel and the virtue of religion, however, are not cheap items in a garage sale. The gospel, and the religion it inspires, is the most awesome and life-changing message ever given to humanity. It is more valuable than any program or service. It is larger than any social event. The gospel reveals our life’s mission to us. It calls us to the way of the Lord Jesus. It summons us to true worship.

Of the many parts of our discipleship that the Prosperity Gospel dismisses, the role and importance of redemptive suffering are at the top of the list. As such, it’s important for us to go deeper into the mystery of uniting our suffering to that of Jesus Christ.

Did you enjoy this excerpt? Order your copy of Real Religion today!